“Remembering mine affliction and my misery, the wormwood and the gall. My soul hath them still in remembrance, and is humbled in me. This I recall to my mind, therefore have I hope. It was the Lord’s mercies that we were not consumed, because his compassions fail not. ~Lamentations 3:19-22

When Peter and I were married, we knew kids were on the menu. We wanted to be parents and when the time came, we were very excited. That first pregnancy test was so thrilling. We lived in Germany at the time and had to wait HOURS before we could call family to tell them the good news.
The excitement was short-lived.
A few short weeks and we lost the baby.
To say I was devastated was a true understatement. My world was rocked. I honestly never thought such a thing would happen to us. Despair set in and I was in a bad place. I felt lost and confused. I couldn’t understand why God would do this to us. Little did I know, He had more in mind.
And He wasn’t doing something TO us, but IN us.
In less than an eighteen month period, Peter and I lost five babies in four pregnancies. I had to have two surgeries, more blood work than you could imagine, and we even did genetic testing. We were so desperate for an answer. But this answer did not come until years later.
When I lost the twins, pregnancy number four, I was done. I told Peter that my mind and body could not take any more and for now, I had no plans to get pregnant again. Funny how our plans are not always His plans.
Through a miracle of God… no really, a miracle… we conceived again. When I found out I was pregnant yet again, I bawled my eyes out. Why?! I couldn’t go through this again. My soul was broken and my heart could not take another hole. But as days went by, and we hit milestone after milestone, I was beginning to see that this time was different. God was planning something big for this baby. And for the first time in a long time, I could envision holding a child in my arms. 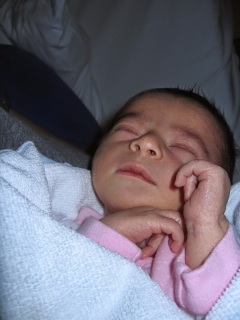 Samantha  was born in January of 2007. She was not easy in getting here. To say it was a rough delivery would be putting it nicely. But she made it. I made it. We made it and we finally held that perfect baby in our arms. All 6 lbs, 12 ounces of her. And this was only the beginning of life. It got better from here.
The pain and hurt of losing my babies never fully went away. And I know that it never will. The wound is not as raw now, and for that I am thankful.
It wasn’t until a friend of mine, years later, lost a baby that I began to understand part of God’s plan. Through it all, I was able to understand what she was going through. I was able to perhaps say the right thing that I needed to hear when I lost my babies, but never heard. And more so, I was able to pray in a more accurate manner, knowing all the ins and outs of this kind of grief.
God unfolded a beautiful plan for our lives through loss. He showed us that compassion and empathy only come when you have experienced such things yourself. He showed us that we could have been angry and bitter, but instead, He humbled us by using us in another persons life. Amazing. He orchestrated all these events so that we could be used for Him.
For this very reason, I am beyond blessed. To be used. To be able to help. To be softened enough to hear His still small voice.
I should have been consumed by my grief, but I wasn’t. Why? Because His compassions fail not.
Posted January 18, 2015